“The Union Building, designed by architects Harding and Upman, is a thirteen-story Neoclassical Revival style building.  It was originally named the Alderson-Stephenson Building in honor of businessmen Charles Alderson and Samuel Stephenson who financed its construction.  The Union Trust Company was the main tenant in the building, which was later converted into a general office tower.

The building required 32 concrete piers that extended down 64 feet through 18 feet of quicksand to support the steel frame.  The first two stories of the brick building have a rusticated stone facing.  The building has one-over-one, double-hung sash replacement windows with stone lintels, keystones, and sills.  A cornice is embellished with decorative brackets and dentil molding.  A recessed entrance facing Kanawha Boulevard features decorative acanthus leaves and egg-and-dart molding.  The building was finished on all four sides since it was such a visible building.

Companies that inhabited the building after completion were the Scherr-Morton Company, Fisher, May & Company, Stock Brokers, Civil and Mining Engineers, Consulting Accountants and Auditors.  The Scherr-Morton Company held offices on the second floor of the Alderson-Stephenson Building and were one of the top insurance companies in Charleston at the time.  Scherr-Morton handled fire, life and casualty insurance, surety bonds, loans, and real estate, and insured most of the successful and developing businesses in Downtown Charleston.  Stock brokers, Fisher, May & Company, were members of the New York Stock Exchange, and opened an office on the first floor of the Alderson-Stephenson Building to provide Charleston with a firm to save community members from traveling to New York to invest.  Civil and mining engineers, Clark and Krebs, housed their office in the building as well, and were the top mining engineers in Charleston for a number of years.  These geologists were credited with some of the most remarkable feats of engineering in the southern parts of West Virginia.  When consulting accountants and auditors, Jayne and MacCutcheon, opened their office in the Alderson-Stephenson Building they were newcomers to Charleston, but proved their worth in the community in just a few short years.

‘Five Years ago there were few persons in this part of the country who had an idea the progressive citizens of Charleston would ever erect such a massive structure as is that at the Kanawha river end of Capitol Street, but there were those in the East who had been looking toward Charleston with a knowledge that it would someday become a city that would well afford such a building’

At the time of its completion, the Union Building was the tallest in the state and a symbol of the city’s early banking and business prosperity.  Between 1938 and 1940, Kanawha Boulevard was constructed along the Kanawha River, separating the Union Building from the remainder of the business district.  All other buildings on the south side of Kanawha Street were demolished for the boulevard project.  Only the Union Building survived, because the City of Charleston ran out of funds for demolition.  Today, Charleston’s skyline would be dramatically different without the iconic Union Building.” 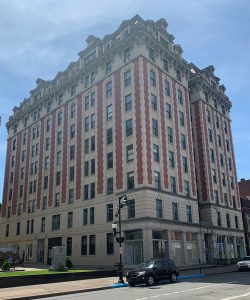 The Goff Building is truly a West Virginia Landmark. The building is part of the Clarksburg Downtown Historic District, which is listed on the National Register of Historic Places as of 1982. Clarksburg has a rich heritage in West Virginia, and this building, having been commissioned in 1909 by one of its most prominent citizens, Nathan Goff Jr., tells much of the history of West Virginia and the city of Clarksburg. The building itself remains almost unchanged on the exterior from its completion in 1911 and stands as a beacon of Clarksburg’s growth at t

he turn of the century.